The simple.
The pure.
The first time.
Done once.
Done the right way.

The simple.
The pure.
The first time.
Done once.
And done the right way. living under a dotted mushroom,

giving me shade from the sun

and nourishment late at night.

A BORING AFTERNOON AT THE PET STORE

A boring afternoon at the pet store.
“What to do? What to do?”
the white cat pondered to herself.
The only movement was an annoying fly.
It flew around the store.
The four kittens followed the fly with their eyes.
In fact, they couldn’t keep their eyes off it.

The fly was black and furry.
It had unusual yellow stripes down its back.
The smallest cat wanted it for a new baby brother.
The Tom cat wanted to swat the thing with his tail.
The fly finally landed.
On the Tom cat’s nose.
“Ouch,” Tom cat screamed out.
“It bit me!” he said while rubbing his nose.

Fluffy, the big white cat, ran over to Tom.
She said,”It didn’t bite you but stung you.”
“Oh no! Oh no! What should I do?”
Tom ran around in circles.
The white cat moved closer to look at his nose.
“It’s fine. If it swells, we’ll put ice on it. It looks better
than the poor fly.”

The four cats looked down at the fly lying on the ground.
“It gave its life so it could sting you,” Fluffy said.
“But why would it do that?” Tom looked confused.
“It’s the way of life,” Fluffy said in a sad voice.
“I know! We should bury it with a service and all.”
The little voice came from the youngest kitten.
They all agreed with him.

Not having a yard for a burial, they wrapped the fly
in a tissue and were going to flush it down the toilet.
But first, the youngest, Squeaky, said a few words.
Squeaky was sad that the fly didn’t even have a name.
“Let’s call her Miss Bee,” Fluffy suggested to the group.
“Why? It was a fly.” Squeaky was upset.
“No, my dear, she was a bee. And that is why she stung Tom.”
Squeaky began to cry.

After wiping his nose and eyes, Squeaky agreed to call
her Miss Bee.
“Goodbye, Miss Bee. We’re sorry we didn’t get to know you
better. I hope you make friends in your new life.”
With that said, Squeaky flushed the toilet and watched
Miss Bee float away to her new life.
“Goodbye Miss Bee,” Squeaky said. “We’ll miss you.” Little guy being rescued after trying to cross the highway in Ecuador. Sleep the slumber of kings.

Move your paws in tune

With the melody in your mind. 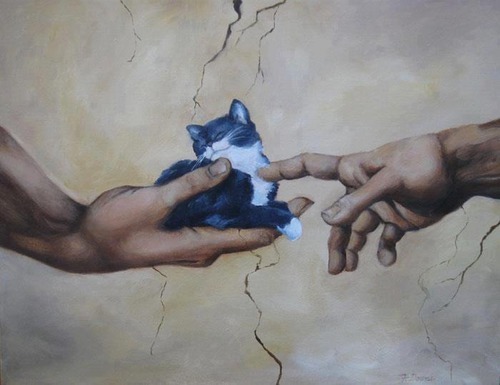 A house fall on you?

And begin a new day. A kitten aboard a floating victoria water lily pad in the Philippines, circa 1935

Floating in the sun.